Easter Sunday is usually the time where you and your family get together over a hoofing lamb roast, stuff yourself full of Easter eggs and watch some kids film on the telly. This year I strayed from tradition because I was invited to a cookery class at Cheltenham’s East India Café.

The Anglo-Indian place on the prom has been on my radar for quite a while; word of mouth, I’ve only ever heard good things, so it was great to be able to get in on this lunchtime experience (cheers Honeybourne Line!).

Truth be told, The Chap and I were pretty hungover after a few too many bank holiday beverages on the Saturday night, but boshing a hot cross bun and a pint of tea for breakfast sorted us out, and off we went.

East India run their ‘Cookery Masterclasses‘ on the last Sunday of every month, with the themes and menu changing each time. Their general cooking style is a bit different to your average Indian, with their inspiration coming from the years of the British Raj (1858 – 1947). The lifestyle – particularly the dining – of the British Raj was said to be incredible, prompting East India to dip into the recipes and creations of that time, giving them a slightly more updated twist.

The class that we attended was all about the colonial dishes that originated from the kitchen of Dak Bungalow – guest houses erected by Indian rulers. With four courses to make (and eat), we started swiftly. 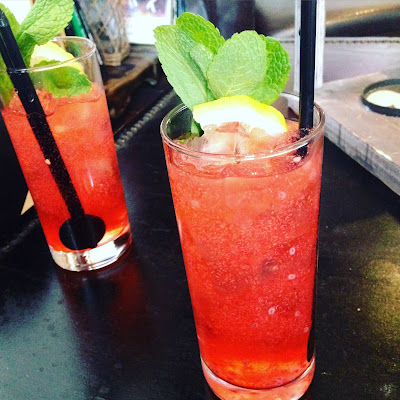 Non-alcoholic Shorbot drinks in hand – a herbal concoction originally used for medicinal purposes – we took to our seats. Although brightly coloured, it was actually delicately flavoured with rose and lemon, and it had added texture with soaked chia and basil seeds floating around in there too.

The set up was different to other cookery classes I’ve been on (here), this was much more like a demonstration as opposed to a hands on kind of thing… Though I did fry some onions like a pro! An induction hob on a table was the makeshift kitchen, with eight of us observing from our tables – all facing outwards, it was a little like being an X-Factor judge for the day. Prep work was fully explained and shown for each course, with the kitchen team assembling the full dishes behind the scenes. You’re basically guided through the foundations of the recipe before being presented with the finished article to tuck in to – no lengthy waiting around for things to cook. Plates cleared, then onto the next one. 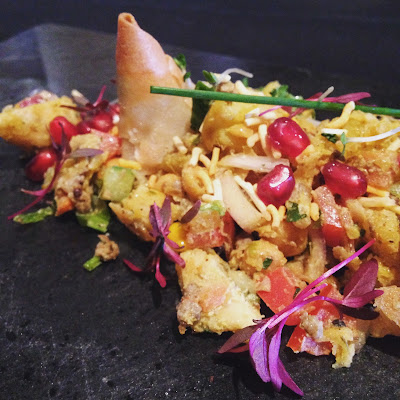 Dish 1: Samosa Chaat. The ultimate street food snack, it’s essentially a deconstructed samosa, or a sort of scrambled samosa, mixed with extra filling and veg. It makes it a bit healthier than just munching on the deep fried goods alone, and looks much more appetising than a few beige triangles on a plate. With a combination of fresh ingredients, herbs, spices, and the most amazing mint sauce I’ve ever tasted, it felt like a great way to start to an Indian feast, and is something I’ll definitely recreate at home. 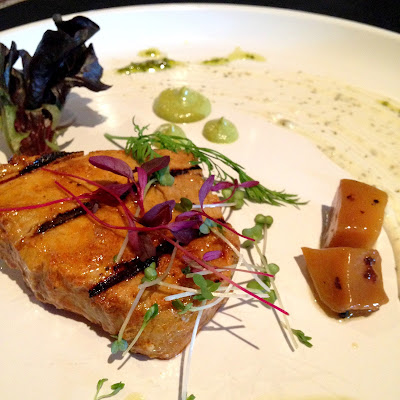 Dish 2: Grilled Yellowfin Tuna Steak. A super easy recipe that would be perfect for a summer BBQ (if the sun ever gets a look in). All that’s required is marinating the fish overnight in a mixed pickle and mustard-y sauce, then searing both sides on a grill, and you’re done! They tarted the plate up with a parsley and coriander gremolata, tartare sauce, and mango, along with a few strewn leaves. It was probably my favourite course of the day, and it’s on their a la carte menu if you fancy it too. 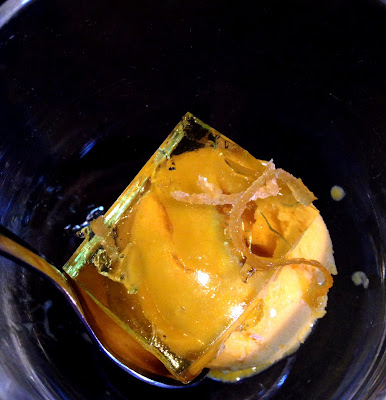 It was at this point we had a palate cleanser of Mango Sorbet with Lemon Jelly, and I ordered myself a White Negroni. This was nothing like any White Negroni I’ve had before; less boozy and more sweet than usual, I presume to pair up to the spices in the food better? It certainly gained points on its beauty nonetheless. 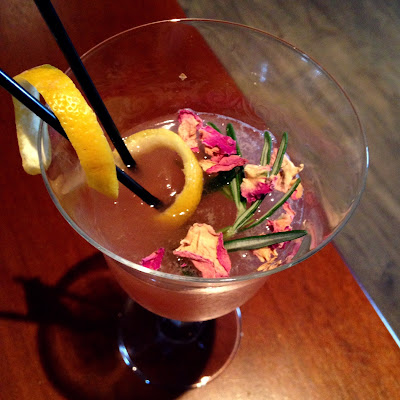 Dish 3: Chicken Jalfrezi. A classic, made with both chicken drumsticks and breast strips, along with a healthy amount of peppers. Taste-wise, amazing (and definitely kicked out our hangovers), but my only qualm would be on the presentation. It came in a cabbage leaf bowl, which we were instructed not to eat, and then had three little buckets on the side; one with a fragrant lemon rice (yes), one with a bengali spice salad (double yes), and one with extra jalfrezi (huh?). I can see that East India are trying to be a bit different, but it just felt clumsy to eat, especially trying to cut chicken off the bone in a cabbage leaf. 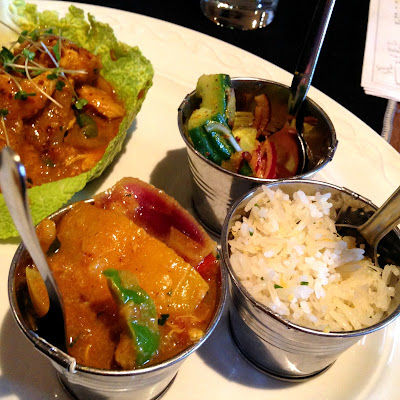 Dish 4: Chilli Chocolate Truffle. Chilli and chocolate are a dream team, and when you throw in some rose flavoured jam and a handful of chopped nuts… Now you’re talking. I’ve already hunted down some of the rose spread they used; I expect I’ll be making these truffles a lot. We had a mini cup of Chai made with soy milk too just to round things off. 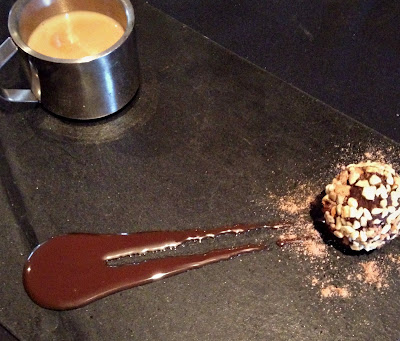 So, not only did we enjoy four courses of Colonial Indian food, we also got the chance to learn about Indian cookery and intermittently don an apron.

I’d maybe say that it’s aimed more at people who dabble in cookery, or those who love Indian food but never attempt to make it at home – the long lists of ingredients can be quite daunting! I feel that adventurous cooks would probably be familiar with a lot of the processes that were explained, but they’d still gain some exciting recipes and get the chance to eat some lovely food with a group of people too. 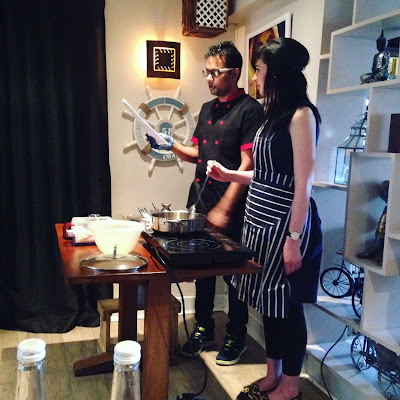 Our hosts were incredibly funny, though I’m not sure it was always intentional, and couldn’t have been more welcoming. The Chap and I left with our recipe sheets, goodie bags containing spices and chai tea, and a new motto;“be your own chef”.